A lot of catching up to do including one of my favorite singer-songwriter showcases coming up on Thurs May 5th @ Hotel Utah w/Heather Combs, Elliot Randall, Melissa Phillips & James Deprado. Yes it’s Cinco de Mayo and there will be massive revelry as well as shouting from the balcony which is always encouraged as this is not just a bunch of songs, but a party disguised as a therapy session. Bring soft things to throw and a sense of humor. This show is hosted by Heather Combs and it never disappoints. One year someone wanted to fight me over Hall & Oates, and another time John Mayer showed up for one of these things. It gets weird out here folks!

Then on Wednesday May 25th is a new event and exercise for me at The Octopus Literary Salon in Oakland, as I’ve been asked to tell a story & play some music with the theme “Coulda, Shoulda, Woulda: Stories of Regret and Alternate Realities.” Hell I could tell that story for weeks but I guess I’ll have to whittle it down to 20 minutes. This is for a cool podcast “Hook, Line and Sinker” which you can check out and is presented by Grenold Coffee, and I’ll be joined by Moe Staino and Mlne Twf from Surplus 1980 and Craig Meier from All You Can Eat and Love Songs.

And what can I say about “Celebrating Bowie” other than the Regency was packed with folks dancing and moved to tears? Probably one of the most amazing musical experiences I’ve had the pleasure of doing not only because of the incredible catalogue of Bowie material (3 hours straight) presented, but also because of the talent that was involved from LA to SF.  Not only did everyone bring their best, but they also brought the best out of everyone else by their professionalism and encouragement. This show was hosted by the actor, Gary Oldman who was great friends with Bowie up to the end, and he couldn’t have been nicer, and enjoyed the show probably more than anyone because of what it meant to him. Angelo Bundini (Scrote) was the point person, band wrangler, and general stalwart of a band that listed 2 folks who’ve toured with Bowie over the years (Mark Plati & Holly Palmer), as well as an incredible core group of Lyle Workman, Patrick Warren, Blair Sinta, Jebin Bruni, Josh Lopez, Paul Bushnell, Russ Gold, the Magik*Magic Orchestra, and the Oakland Interfaith Gospel choir. Pretty much every part to all these amazing songs were covered along with a who’s who of special guests including Jerry Harrison, Angelo Moore, Gaby Moreno, Joe Sumner, Dorian Holley, Preacher Boy, Jim Greer, Jeremy Little, Princess Frank, Carletta Sue Kay, Mark Growden, Karina Deneke, Meryl Leo Press, Mirv, Brain, Michael Urbano, Jim Boggios, House, Libby Lavella, Celia Chavez, Alex Painter, Paul Jensen, Brett Hool, Simon Petty. There was a 7 camera shoot on this show so look for some footage from that, but in the mean time there is a lot of it on Youtube. Thank you all again for listening and showing up. We’ll be back in the studio later this year to work on finishing up the new record. 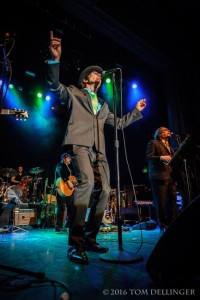 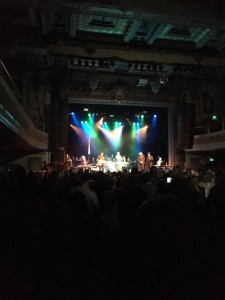