Where the hell do I begin to catch up? Lets do this in sections shall we?

First off we have our next full band show at the Ivy Room on 4/2 and this is gonna be a great night out of music. We’ll be headlining this night and I’ll have the full band along with Adam Rossi, Andrew Griffin, Vicki Randle, Erik Schramm, Pie Fiorentino, Joey Dibono & special guest Jerry Becker. This is gone be a killer bill along with the incredible Matt Jaffe and his band playing in the middle, and the talented singer-songwriter Dylan Rice kicking the night off with his album release party

Get your tickets here and we can’t wait! Also a big thank you to Mississippi Mike Wolf for the flier.

Thanks again everyone for coming out to this show and it was an excellent night with everyone involved. A lot of folks showed up and we’re much appreciated of that. Was fantastic to the see the return of Pine & Battery as well as Heather Combs & Max Delaney kick some butt. Was also great to dust off a couple of new songs “Lee Marvin’s Uzi” & “Angel Of Angles.” Also a big thank you to the band and an extra thank you to Loralee Christensen for printing out some TMFT (Try Mutha Fucker Try) T-shirts for the “Screaming Angels” 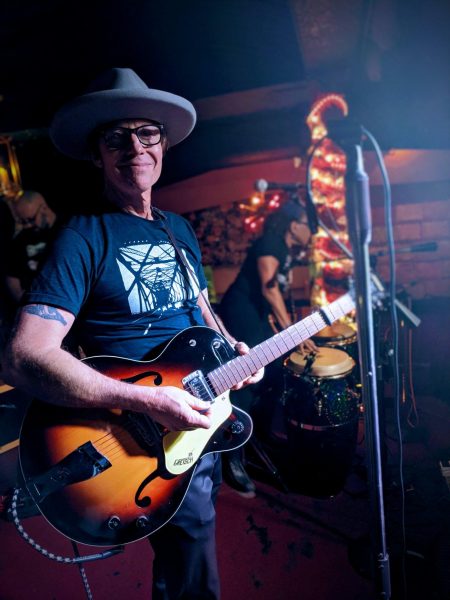 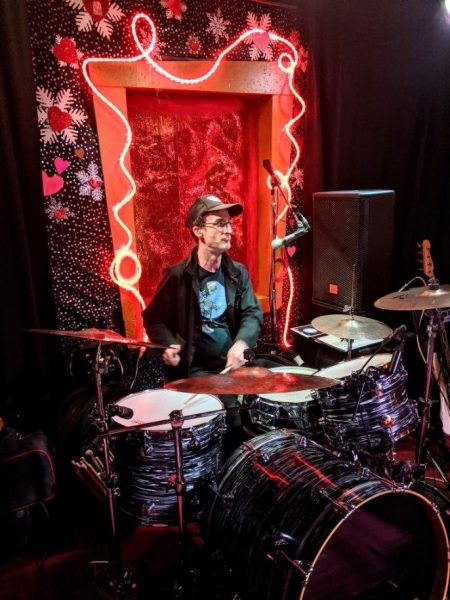 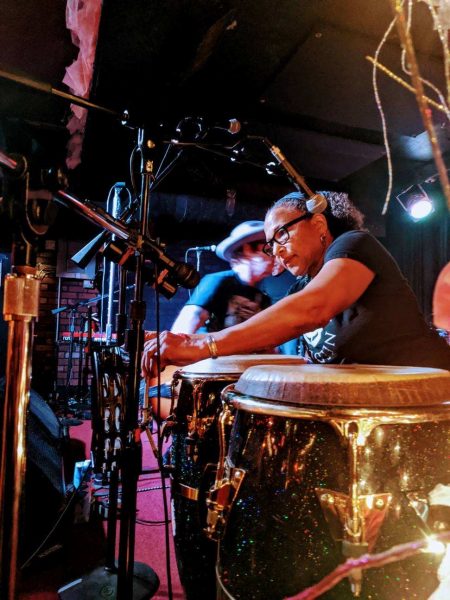 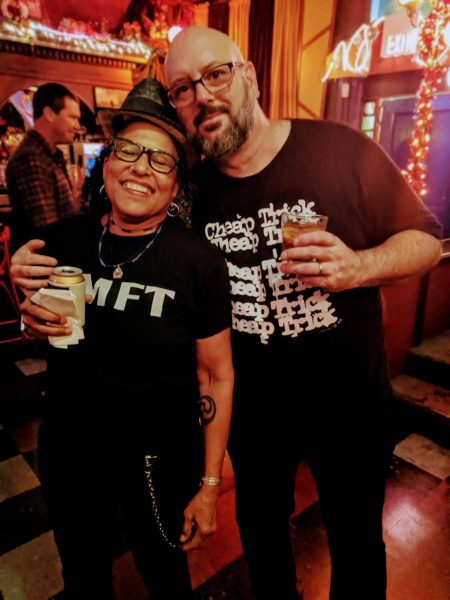 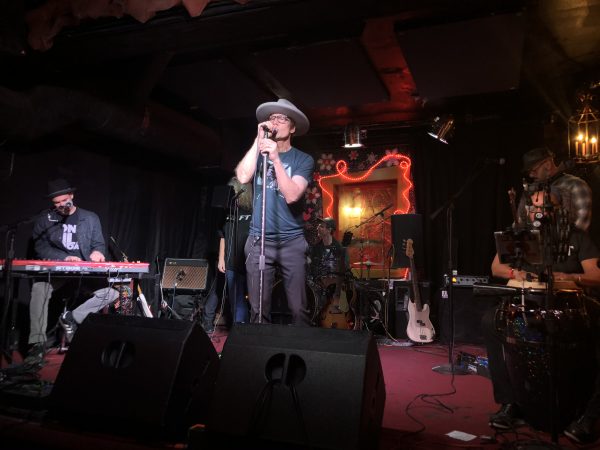 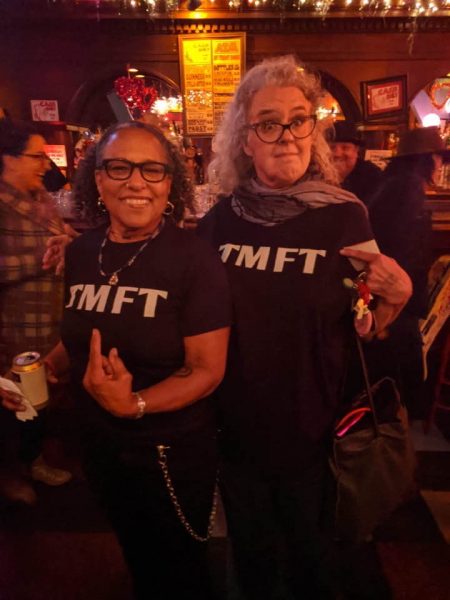 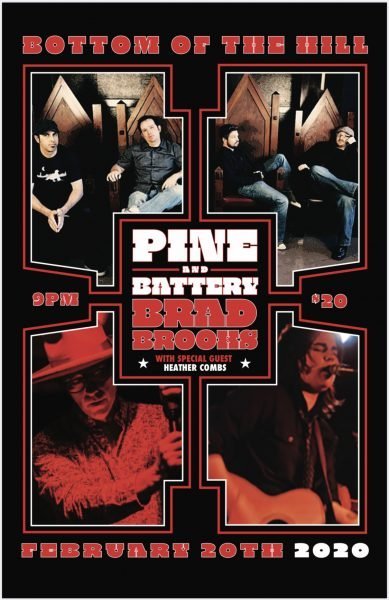 The finishing up of “God Save The City” the new record coming in 2020! 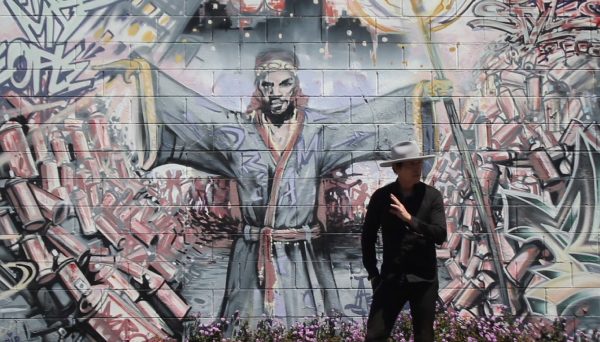 We went into the studio 12/17/19 to track the last songs for the new record as I felt like it was time to finally get it out for 2020. 2019 was probably a year that I wrote more songs than I had in a long time. Part of it was the inspiration to collaborate more (thank you Jerry Becker)  and the other one was the times are just fucking calling for it! Also I think I just got more disciplined about putting pen to paper, and not so precious about what it all meant. We went in and recorded “Lee Marvin’s Uzi” a true tale about the first time that I met the legendary actor when I was his water delivery person in Tucson, AZ.  In the later part of last year I got to do some songs by Roky Erickson, and I think that vibe kinda sunk in on this one. The other one is “Angel Of Angles” that Jerry and I wrote that was first titled “Angel Of Assholes” but that title got kinda shut down by the band. It’s a song about a good hearted person who keeps falling in love with the same asshole’s. Maybe I’m changing it back to the old title. Let’s vote!

If there’s been one constant in making this record it’s that I wanted to keep it spontaneous, not do to many takes, have everyone play live in the room, and that it had soul. Adam Rossi has done a great job producing it and keeping those ethics in tact. This is a record that’s been in me for awhile and I really wanted to do it with the band that’s been playing with me now for about 8 years. Some of it also was inspired by photographers Tom Dellinger & Tamarind Free Jones, and seeing their photos of us performing and what I saw in those guys (Adam Rossi, Andrew Griffin, Erik Schramm, Pie Fiorentino, Joey Dibono) made me want to do this with them no matter how long it took. Now anyone who knows me knows that putting out records takes me a long fucking time. There was a lot of living that I needed to do, and was forced to do during the whole process, and I don’t know if I’d trade any of it because it made the words ring more true and possibly less veiled. It also takes time to write, wrangle and pay for these things. It’s been 5 years since we first went into the studio and that was right around the time of the diagnosis of my throat cancer, which also inspired me to get it together because I didn’t know what I’d have by the time I was finished. We started out with 4 songs (God Save The City, Why Do You Hurt, Do The Same, Heartbreak Of Fools) and if I had any template at all in the beginning it was that I wanted to make a “Frankie Miller” record, and especially like his first one with Brinsley Schwarz called “Once In A Blue Moon“.  Now it will be up to you to decide that, but what I can tell you is that you can’t live here in Oakland and not pick up on some East Bay Grease and mud on your moving feet. It’s also extremely hard to not see that SF & Oakland are changing so fast and not necessarily for the better with gentrification, little to no affordable housing, and homeless folks getting shuttled around to be out of sight. It’s not a dour record mind you but I had a lot of questions to ask with this record, some in the titles, some in the lyrics, and a lot about how people treat each other. Where is our humanity? where is our love? The record also  has musical revelation’s in it with “The Screaming Angels” of Vicki Randle & Loralee Christensen, whom have added an incredible amount of joy and their incredible harmonies throughout. Vicki has a resume that is unbelievable and still has the passion for music that is inspiring and infectious to be around.  Since she’s gotten off the road with Mavis Staples it’s been a blessing and honor to have her all over it along with Loralee who is a powerhouse of a person and singer. Lastly I need to mention that because this record was started awhile ago, it also has the legendary Ralph Carney on it before he moved to Portland and also before he passed away. If you don’t know about Ralph, then start diggin into the archives. It’s gonna take you awhile…………I’ll wait for ya.

With the first show of the year this one was a helluva night and with Wes in town performing “Wesley Stace: A Tribute to John Wesley Harding featuring Robert Lloyd” it was one for the books and put my faith back in SF music. As some folks know Wes is/was “John Wesley Harding” the singer songwriter who started out here in SF in the 90’s and became/is one of the best that has ever come through here in my opinion, and with heart & humor, his lyrics seem to fit the current times even more now than ever. With Robert Lloyd backing him on practically every instrument imaginable and cohort Chris Von Sneidern (who recorded some of Wes’ records) it was a fucking blast. I had the pleasure of opening up the show to an extremely appreciative group and maybe I even got them to hydrate even more than they ought too. It was fun to play some of the new songs that we’ve been in the studio recording like “Lee Marvins Uzi” & “Angel Of Angles” all stripped down and naked. Also was invited to sing with Wes on the classic “Things Snowball” and as you will see below, I couldn’t stop the elbow from cheering it on. Such a fun night and Amados is just an incredible listening room. Let’s keep that place going. Thank you Jay Siegan Presents! 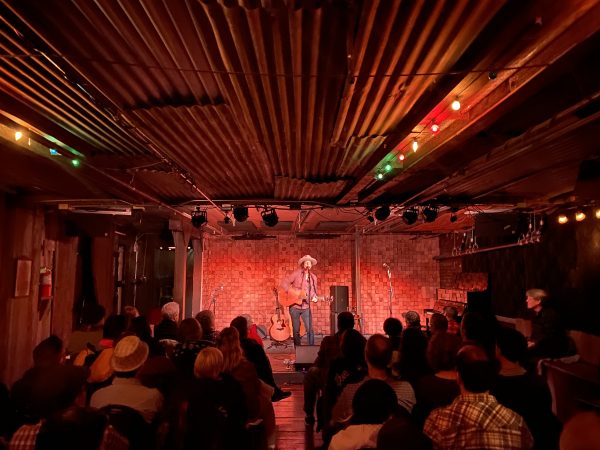 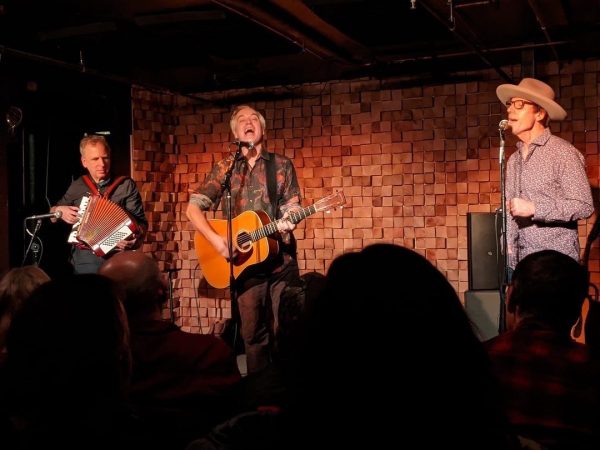 Got to be part of this crazy holiday event that just gets better every year and so excited to once again perform with Marc & The Casuals with their stellar all star line up of Marc Capelle, Bart Davenport, Tom Ayers, Michael Urbano, Pete Strauss & Evan Capelle, doing the Sparks song “Thank God It’s Not Christmas” and “My Sweet Lord” 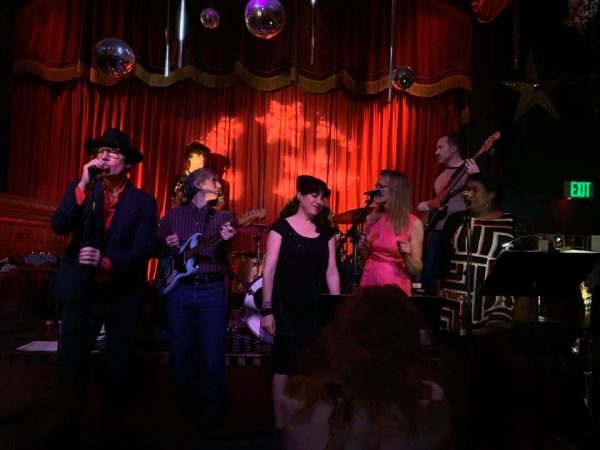 Jumped up with my cancer fightin’ ass kickin rock n roll slayin’ brother Eddie Spaghetti for a little acoustic show at Hopmonk Novato for KC Turners event with J.D. Pinkus and what a night that was. Got to sing and play a bunch of Supersucker jems with Eddie and also see J.D.’s incredible one man psycho audio/video performance. A killer night! 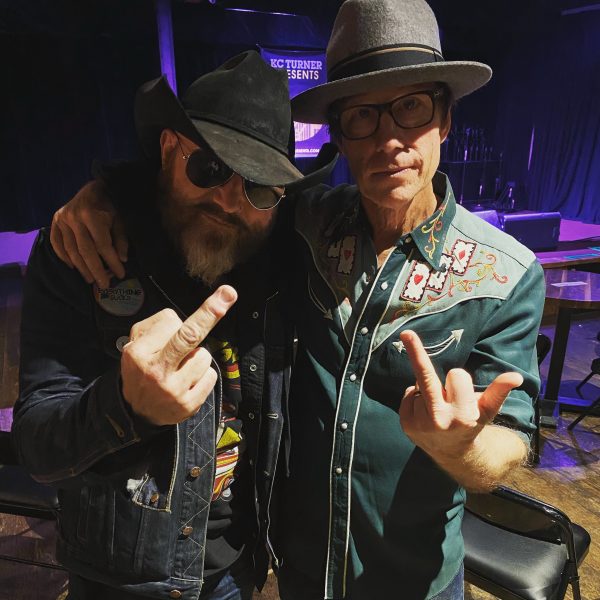 This was such a great feel good fun show for all the bands as our good friend and amazing photographer Tom Dellinger came into town from Mobile AL. Tom has been shooting my band for over 8 years now and he’s just one of the best and knows how to get amazing live shots. Was great to see him and his wife make the trek out for the show. Also my buddy Damien Rasmussen came and took some fabulous shots as well, so this show was fully documented. The night kicked off with New American Farmers who’s Americana really reminded me of some of my Tucson roots. A super cool band, and what can I say about the mighty Felsen? Andrew Griffin fronts this crazy band of smart, rockin, heart shaped folks who slay. Roger Rocha whom I played with for years in Dolorosa is playing with him and it was a crushing night. As for us we brought all the soul we could muster and it was so fun to have “The Screaming Angels” of Vicki Randle & Loralee Christensen both together for the first time live. These 2 have been singing all over the new record and now we get to do it all live. We also played a brand new song called “Lee Marvins Uzi” which is a true story about when I met him in Tucson, AZ back in the day. 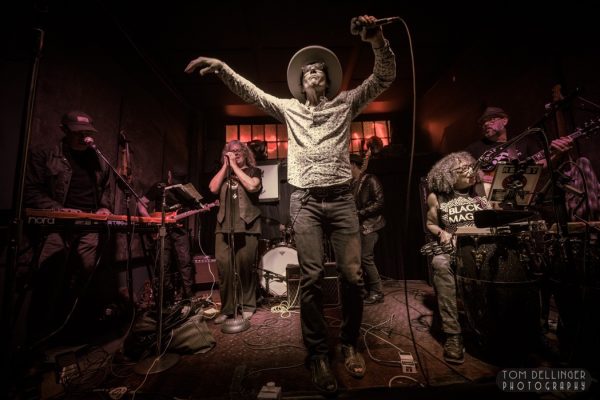 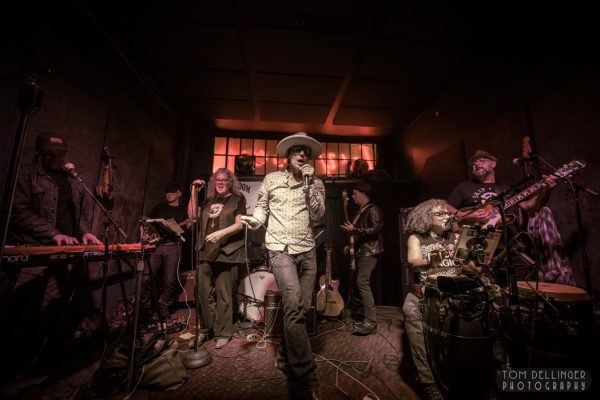 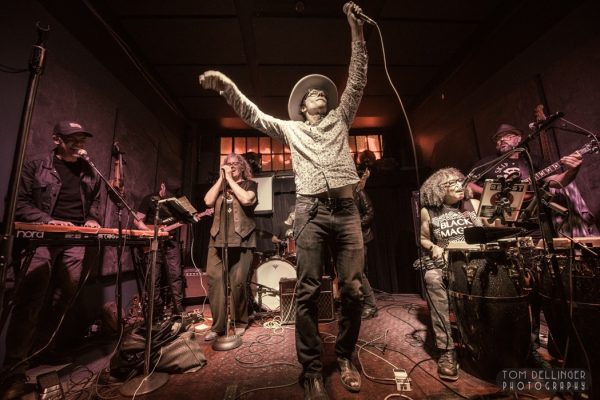 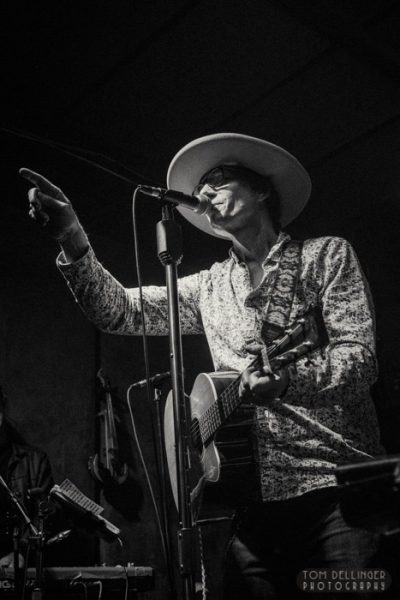 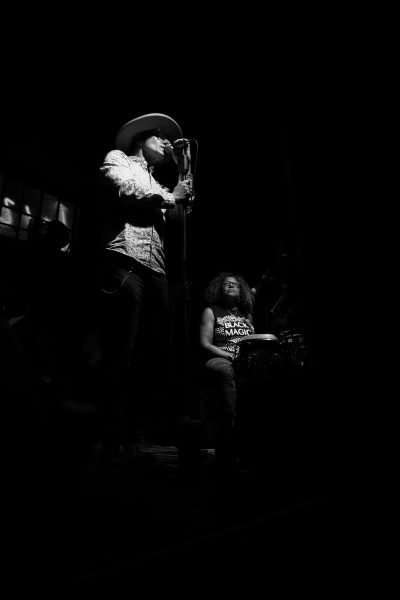 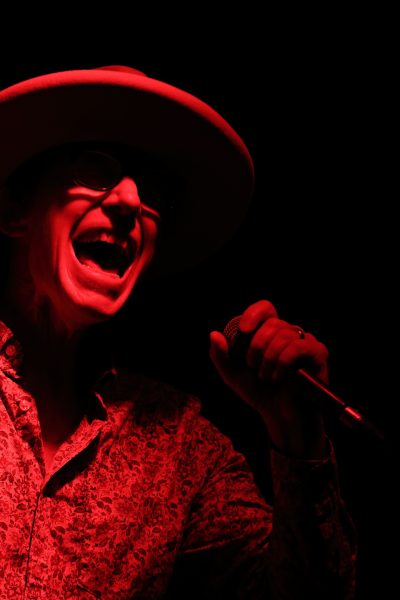