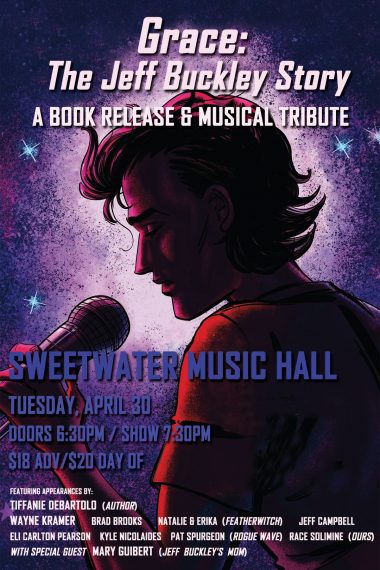 With the release of Tiffanie DeBartolo’s book on Jeff Buckley is a musical tribute featuring a whole lotta talented folks playing some of Buckley’s finest.

I’m very excited to be part of this special night and will be performing “Everybody Here Wants You” with my special guest Adam Rossi. Also jumping up there with the legendary Wayne Kramer from the MC5 and celebrating his birthday. You’ll wanna get tickets soon!

California, 1991. All his life, people have told Jeff Buckley how much he looks like his father, the famous ’60s folksinger he barely knew. But Jeff believes he has gifts of his own: a rare, octave-spanning voice and a songwriting genius that has only started to show itself. After he falls in love with a mysterious girl in New York, he sets out to make a name for himself outside his father’s shadow.
What follows are six turbulent years of music, heartbreak, hope, and daring—culminating in a tragedy that’s still reverberating in the music world today. Written by Tiffanie DeBartolo and with art by Pascal Dizin and Lisa Reist, this graphic novel biography uses archival material provided by Jeff’s mother, Mary Guibert, to reveal the young songwriter in the process of becoming a legend.
Tiffanie DeBartolo is the author of How to Kill a Rock Star (2005) and God-Shaped Hole (2002) and the writer and director of the Columbia Tristar movie Dream for an Insomniac (1996). She is the cofounder and CEO of San Francisco Bay Area record label Bright Antenna Records and lives in California’s Marin County with her two dogs, Kazoo and Dipsea, and her husband, Scott Schumaker.
Pascal Dizin is a comic book artist and illustrator. His first graphic novel, City of Spies, was published by First Second in 2010. His illustrations have appeared in Time Out New York, on the covers of Jack Gantos’s Joey Pigza book series, and more. You can find him on the web at dizin-art.com.
Lisa Reist is an illustrator and colorist based in New York City. When she’s not drawing or reading, she’s probably knitting. This is her first graphic novel.